It is very windy and rainy outside of KKK, Tiraspol central (only) cinema. Surly Lenin is watching were his descendants are heading tonight. Of course to the Swedish Film Festival!
The Embassy of Sweden in Moldova and Transnsnistrian Ministry of Foreign Affairs are closely cooperating many years in favor of Transnistrian citizens trying to bring something new and positive in their daily life. The film “The Hundred-Year-Old Man Who Climbed Out the Window and Disappeared” did not leave no one untouched. This is not a mable-gamble trash action movie with really stupid story line. Some people where shocked and angry after watching how film director made fun on Soviet Union and KGB,but majority really liked the idea and laughed as hell 🙂
Some scenes made me draw a line between a life in Transnistria and the abundant Bus stop where Allan Karlson began his hilarious adventure. I am not sure if Transnistria will also find a travel bag with 50 million EUR to begin a life long journey. But again, all depends of friends, enemies and God 🙂
List of films for 18-22 March in Tiraspol

Unexpected tradition for post soviet countries to have FREE snacks and drink at the opening ceremony in public with great number of people. Many youngsters did not expect such an unusual great treatment for this region. 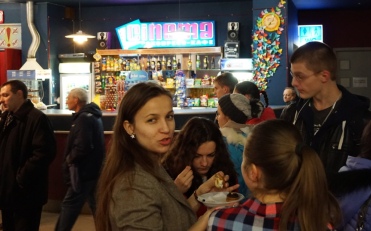 Any way, the movie was great! Thanks for sharing it with Transnistrian population!